A tip for Chelsea fans. The ‘Spanish waiter’ will serve you well says Dietmar Hamann 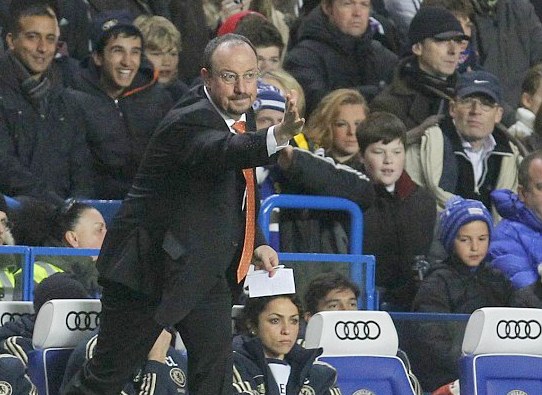 Take it from me. It is an insult to call Rafa Benitez a “Spanish waiter” – as Chelsea fans have done. I have never come across a Spanish waiter as smart, savvy and, on a good day, as charming as Rafa.

As I write, Chelsea have won three games on the trot under (more temporary than most) manager Benitez. Where are the Chelsea fans with their banners abusing a man who has forgotten more about football than they will ever know?

Of course their problem with Benitez was that he had managed Liverpool and did so to European glory, taking the scalp of Chelsea in en route.

One of his former players, Dietmar Hamann, has a message for Chelsea fans:- “get over it.”

He adds: “Chelsea fans are probably bitter that their new boss is a manager who twice denied their team a place in the Champions League final – each time with an inferior side. Yet surely Benitez’s successes at Liverpool are a reason for celebration rather than anger.”

Hamann has a further message for Chelsea fans:- “Enjoy the success that is coming your way. I simply do not understand how you can question the appointment of Benitez as your ninth manager in eight years.

“I don’t think there are many more knowledgeable people in the game than Rafa. I have worked with some of the best managers in the world and Rafa is right up there.

But the brevity of the contract offered to Benitez is a concern for Hamann.

He says: “He effectively knows he isn’t being given the time to put his stamp on the club and that could be awkward, especially if he has ideas about players he’d like to buy in the summer. He may not be there in the summer.”

Will Chelsea fans change their minds?

In the main, I agree with Hamann.

Moody though he can be, Benitez is a top class manager. He knew what he was doing when he took such a short term offer.

He was using Chelsea to put himself back in the spotlight.

After all, there will be a vacancy soon at the club where he began his career.

To take the impossible job, managing Real Madrid, has always been an ambition for Benitez.

And when the inevitable happens, and Jose Mourinho moves on, Rafa Benitez will be a candidate for that job.

It is just possible that the Spanish waiter could serve up what Real Madrid fans long for. A much sought after Champions League title.

Who knows? Perhaps at the expense of Chelsea.

That’s the trouble with waiters. There is always a danger they will spit in your soup!