Ryan Moore speaks of his joy at winning the Ascot Gold Cup for the Queen. And that wave!

Ryan Moore speaks of his joy at winning the Ascot Gold Cup for the Queen. And that wave!
Posted by Vern on 24th June 2013 in Horse Racing
0 Comments

Ryan Moore has been my favourite jockey for quite a few years now.

Long ago, while attending racing at Sandown Park in the company of John Terry and other high stakes punters, I had a fiver each way on a Ryan Moore ridden horse at odds of 66-1. The footballers in attendance mocked the size of the bet and the placement.

Much to my amusement and delight, the horse won. I doubt you will see bookies price a Ryan Moore ridden horse at those odds ever again.

After a season or two during which overseas riding commitments or broken bones meant that he had fewer winners in the UK, Ryan seems to be back in contention for the title as champion flat jockey.

Before the season began I took the price of 3-1 for him to be so named. I told members that only injury or too much racing abroad would prevent him recapturing the title.

I think Ryan Moore is the best flat jockey in the business.

As I have stated previously, I don’t care if he smiles or gives eloquent answers to the often daft questions he is asked. I care that he gives everything to his rides. That he does his job professionally and that he wins. Often.

Last week, at Royal Ascot, he smiled from ear to ear upon winning the Ascot Gold Cup on Estimate, owned by the Queen.

Now Ryan has had his say on that day. Estimate was the first horse owned by a reigning monarch to win the Gold Cup.

What follows are his own words.

“It was a pleasure and privilege to be involved. But I have heard that some nonsense has been talked and written about my reaction, with apparently people saying that I was showing my emotional and human side on a racecourse for the first time last week.

“I guess it is an easy and lazy thing for some to say, given the way I operate on a racecourse. Namely, that I view it is as primarily a place of work and people shouldn’t lose sight of that.

“It’s why I don’t do talks in boxes or the like before racing, because I don’t want to short-change my employers. I would rather spend my time after I get to the track walking the course or making sure that I know as much as I can about the others horses in the races.

“Estimate’s win on Thursday went exactly to plan. We had the draw, and she had the temperament, class and determination to take advantage of it.

“Don’t think for one moment that I didn’t know or appreciate the magnitude of the win as soon as I went past the line in front. It was a fantastic day, one that I will never forget, and of course I was elated.

“I have ridden big race winners for the Queen before (Estimate in the Queen’s Vase last year and Carlton House in the Dante) but this was clearly on another level, not least because it was the Gold Cup and a Group 1 win.

“And the best part of the day for me is when I was walking back in front of the stands after the race.

“I looked up, gave the Queen a wave, and she waved back. That was a very special moment. 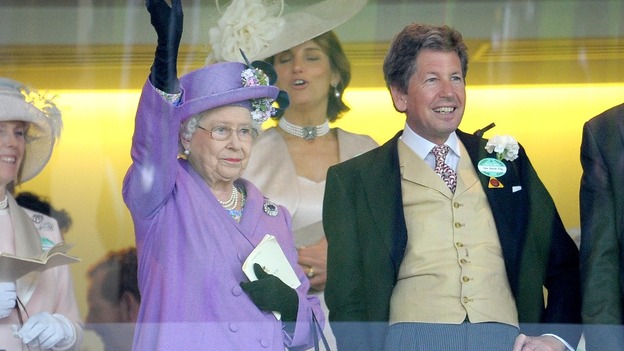 A Royal wave for Ryan. Photo by P.A.

“I will tell you something now, however. The thing with racing is it is a fantastic leveller, you are only 30 minutes away from the next success or failure and disappointment.

“You only have to look at the Hardwicke (Stakes) to see that. One moment the horse (Thomas Chippendale) has won the race, the next (he) is dead on the floor.

“And you don’t need me to tell you that how perilous the game is for jockeys, too; we saw that with Paul’s (Hanagan) narrow escape on Ektihaam in the same race.

“In such a dangerous game as ours, we have to keep our mind on the job at all times and keep focused.

“Enjoy the moment, but then move on to the next one quickly. We have to.

“It is why I don’t get carried away when I win, or too down when I lose, though some people may beg to differ on the last point! There is no time to dwell upon success or failure in a sport when your next job is 30 minutes away. Very few other sportsmen operate in the way jockeys do.

“That said, it was a massive joy to win on Estimate.

“Now, I am not going to disclose what The Queen said afterwards – it is not my place to – but I can tell you she is incredibly knowledgeable about the sport.

“She knows the formbook, and the intricacies of stallions and bloodlines, inside out and I dare say that she is already planning who to send Estimate to.

“She is a great forward-thinker and planner and the passion she generated after the win was very real indeed. You could see the joy and emotion in her face and hear it in her words, too.

“The sport is simply very fortunate to have her as a supporter.

“But, I have probably said too much already, so I will leave it there.”

All smiles. Photo by Getty Images