Peter Crouch. Standing tall and keeping pace with the young ones 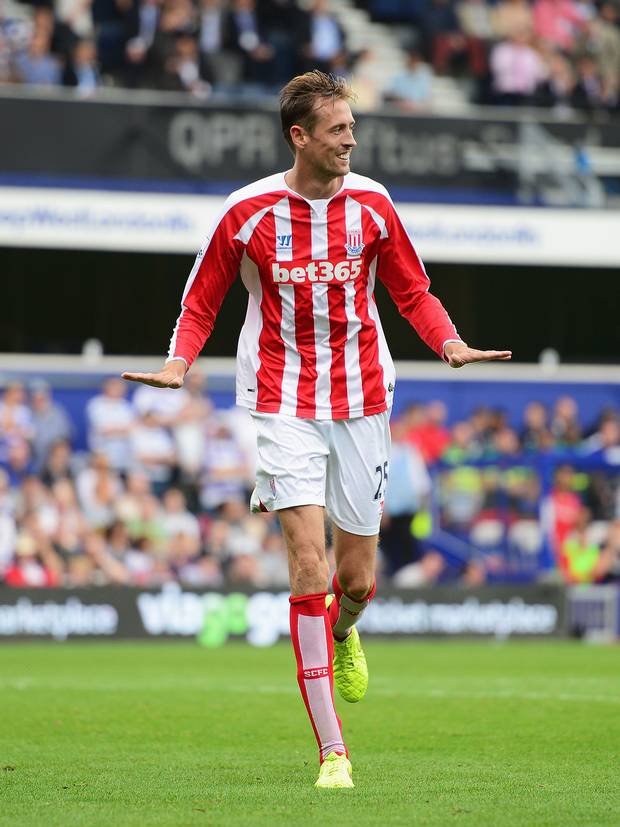 Peter Crouch is back from his holidays and he might have put on some weight. Not that you would notice.

He’ll lead the line in many a Stoke City game as manager Mark Hughes looks to continue the improvement in the squad. Improvement that saw Stoke finish 9th last season – the highest Premier League finish for any Stoke City side.

Crouch will be playing alongside other International players this season. But he can hold his head high when it comes to his International credentials.

Sought after by several managers in the past, Crouch was banging in goals in the league at the time he was called up to play for England. Crouch did nothing wrong when wearing the three lions shirt. He scored 22 goals in 42 appearances for his country.

Crouch says: “Every time I played for England I felt I would score. I loved those games and it’s a pity there weren’t more of them.”

He’s played for the likes of Fabio Capello, Sven-Goran Eriksson, Rafa Benitez and Tony Pulis. Some managers have been more appreciative of what he offers a team than others.

Crouch says: “I’ve played for a lot of good managers, but Harry Redknapp was the best.

“He instilled unbelievable confidence and that brought out the best in me.”

With the summer holiday ending, Crouch never worries about putting on extra pounds during the close season. He says: “I have six weeks off in the summer, eat everything, do virtually no training and come back for pre-season a few pounds lighter.

“Nowadays everyone has a fitness programme specifically tailored to his needs. We have physios who get our bodies back to where they should be after we play and with the support we get, I don’t see why I can’t keep going. Pace is the thing you lose as you get older but I never had it to lose.”

He’ll have to be at his most lethal in front of goal this season. Competition for places will be all the more fierce now that Crouch has been joined by several new faces. Manager Mark Hughes has been busy and has bought well.

Hughes has made one signing in particular that could prove to be a bit of a coup.

Ibrahim Afellay is now 29 and has picked up more than his share of injuries but remains – on his day – a dangerous winger. Although he prefers playing in the centre of midfield these days.

He says: “During my time at different clubs I have also played as a winger and I have played in many positions. But I prefer to play in the middle.”

The Dutch international was the fourth signing from Barcelona, following Bojan, Marc Muniesa and Moha, and also joins up with international colleagues Erik Pieters and Marco van Ginkel.

Afellay adds: “I know the players from Barcelona, I know Pieters from PSV, I know Van Ginkel and I know Marko Arnautovic, so it shouldn’t take me long to adapt into the changing room. The other team-mates too have made me feel welcome from day one.

“I won four titles with Erik at PSV. He’s a good player and a good guy and it will be nice to play with him again. It’s always good if you have someone in the team who you already know.”

What about those injuries?

Ibrahim said: “Injuries are in the past. I only think about the future. I’ve done medical tests, I’ve passed and I’m fine. I don’t think about any injuries.

“I am ready to go. I have trained a lot and done a lot of work and hopefully that showed in my first game against Cologne on Saturday. If I hadn’t done that I wouldn’t have been able to play for an hour. It was a nice game to play and prepare for the new season.

“Hopefully I can make my debut against Liverpool. I saw that win and performance on the final day of last season like the rest of the world, and it was a great result.”

**For information only: Stoke City to finish in the top ten clubs in the Premier League is available at 11/10 with most bookies.

Get my season long football tips, and week by week match tips, by joining VG TIPS for £10 a month.