Paul Lambert – he had to go

It’s over and out for Paul Lambert

Living through the era of football that I have, and being a Sheffield Wednesday supporter since 1968, I’ve always had a little soft spot for Aston Villa. Back in the day we were two similar sized clubs, and each with fantastically loyal supporters. That much has not changed.

Memories of us winning an FA Cup 4th round replay against Crystal Palace at Villa Park back in February of 1973 live on with Wednesdayites who occupied the famous Holte Ed that night. Sadly, I missed the departure of the London Owls minibus and to this day it remains the Wednesday match I most regret missing.

Fast forward two decades and Sheffield Wednesday fell from the Premier League. A section of fans called for the head of manager Trevor Francis, a manager who had taken us to Wembley three times in 1993. Finishing the Premier League season a fraction below halfway was not good enough for a vocal minority of fellow Owls fans and the idiot who was in charge of our club at the time, one David Richards, fired Francis but didn’t have the guts to face up to the man.

I mention this because, in my opinion if not that of all Wednesdayites, sacking Trevor Francis was a gross error of judgement. This week, over at Villa Park, another man who was never fit and proper to run a football club has also sacked his manager. But this time I cannot argue with the decision.

2 wins in 21 league games since the club signed him up to a new contract last September, and managing a team with less success at scoring than Graham Norton in a brothel, the writing was on the wall. That contract extension to 2018 was a costly mistake by the club.

I’m not big on demanding managers be sacked. But Paul Lambert had it coming.

Villa fans get what they demanded

Though I think any manager deserves to be told face to face. Not by telephone, as was the case for Lambert.

Pat Murphy, BBC Midlands football reporter, said: “Randy Lerner’s statement is one of banal platitudes. More interesting is the statement from Paul Lambert in which he thanks Randy Lerner for his friendship and support and Lambert pays tribute to the fans, who had given him such a hard time of late.

“But significantly Lambert makes no mention of Tom Fox, the current CEO of Aston Villa who started in September and it was Fox who sacked Lambert by telephone. It’s pointed up particularly because Lambert places on record his appreciation of Mr. Fox’s predecessor, Paul Faulkner. Lambert says Faulkner worked with unstinting integrity and constant dignity during his tenure as Chief Executive. So I think we can read between the lines on that one.”

Why don’t club owners do the dirty work themselves? Randy Lerner has allowed Aston Villa to sleepwalk in the direction of relegation, writes Vernon Grant.

Indeed, had Aston Villa owner Randy Lerner cared more for the club he has long been trying to sell, he would have sacked Lambert before they fell into the bottom three of the Premier League.

The TV deal done this week will have focussed his mind. When there is an obscene sum of money being offered, you’re going to want to be among the rich getting richer and not the lower classes. Ironically Lerner never talks to the broadcast media. Once seen as the saviour of Aston Villa, the supporters hoped he’d take them to another level. Well he has!

Pat Murphy knows the workings of Aston Villa well and has long been critical of the reclusive Lerner. He says: “Where is the succession plan at Aston Villa? Paul Lambert has been fighting fires almost since he started. Randy Lerner’s attitude now is ‘I’ve hired you Tom (Fox), you get on with it.’ And Tom Fox has to get it right.”

Pat Murphy concludes: “This quest over the next thirteen matches is more important than a permanent appointment. If they go down they will take a £45 million hit automatically in terms of losing TV rights and relegation would more than halve the price Randy Lerner might get if he tried to sell the club. More importantly who would then want to buy the club if not a member of this rich man’s cartel that is the Premier League?”

When it comes to who owns the club we support, we football supporters should perhaps consider that the devil we know may be a better bet than the one we do not.

Look at Leyton Orient. For decades I thought Barry Hearn was bad news for the club. Orient fans lambasted him for turning Brisbane Road into a modern housing estate of flats with a football pitch in the middle. Hearn was in it for himself said the masses.

In fairness to him he said from day one that he was a businessman and not a philanthropist. His last game as owner of Orient saw the team come within 45 minutes of play off victory. They would have made it to the Championship, which would have been some achievement for a small club with few resources. But they let a half time lead slip, Hearn sold the club to a dubious Italian and now Orient are staring relegation to League 2 in the face.

For years Villa fans were not alone in thinking Doug Ellis was bad news for the club. He wasn’t investing enough money, it was said repeatedly. ‘Deadly Doug’ was too old, past his sell by date and the club needed a fresh injection of new ideas and money.

Along came Randy Lerner and supporters being supporters thought he’d splash the cash. If he ever spoke, he would likely say he has. Many fans say Lerner gave then manager Martin O’Neill loads of money and for that they should have expected a better outcome than finishing in the top six in successive seasons.

All football fans can be guilty of being unrealistic regarding what their club can achieve. Indeed, it’s often those who expect nothing that get the nicest surprise (look at Brentford right now).

I have written previously about how I think Aston Villa fans are wrong to still blame Martin O’Neill for their current malaise. I think those Villa fans who demanded his exit were guilty of ignoring the maxim about being careful what you wish for.

What did Villa fans expect? Champions League qualification? A Premier League title? I recall those heady days when Sheffield Wednesday sat at the tip of the Premier League. It was brief, for sure. But we looked down on everyone else and it was a good feeling. Did I expect it to last? Of course not. Do I think we as fans were entitled to think it should? Don’t be daft.

Had I not been a rebel at my West London school I could have followed all my mates to Stamford Bridge. By now I would have supported a club that had won the Premier League and the Champions League.

But I chose to spend the 1970’s travelling to Sheffield every alternate week. And I chose to spend seasons going to God awful grounds such as Darlington (League Cup defeat on a Tuesday night, no train home), Walsall (leaking roof in a torrential downpour) and Aldershot (the ground was in a park for pete’s sake!). I did so in order to watch a team playing in what was then Division 3 (League 1 to the younger readers). My expectations were minimal. When Jack Charlton arrived all I cared about was him preventing us from falling into the lowest league for the first time in the history of Sheffield Wednesday F.C.

I made my choice and I lived by it. Still do. Aston Villa fans of a similar age group will have seen them win the old First Division and lift silverware in Europe. Perhaps, decades on, they expected that to happen again. Perhaps they thought they had a divine right to such glory.

But we all know football has changed beyond all recognition since then. Eleven players taking to the field of play, and the object being to score more goals than the other lot, are about the only part of the exercise that remain the same.

Aston Villa and Sheffield Wednesday fans of my generation cannot expect to be the force we were in the 1960’s, 1980’s or 1990’s. We may from time to time be in the same league as Chelsea and Manchester City, but we’re not in the same league really. Are we?

If Villa fans feel insulted by my mentioning Leyton Orient and Brentford in the same breath, don’t be. It’s amazing how fast you can find your team playing in the same league. 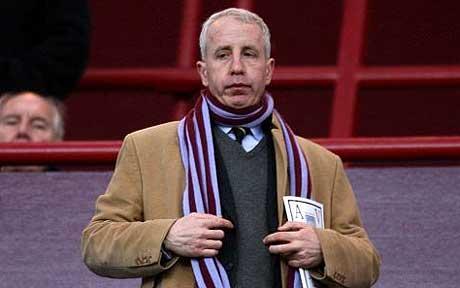 I hope Aston Villa stay up. A club is never too big to go down. Ask my fellow Wednesdayites or Leeds United supporters. Randy Lerner left it late to sack Paul Lambert. Lerner wants to sell the club and he knows for him to get a good price they must be in the Premier League. He may have left it too late, but I doubt it.

I expect certain Aston Villa players (the same ones who got rid of Roy Keane as Lambert’s assistant) will now miraculously reacquaint themselves with scoring goals. They’ll be following the example of QPR players who got their first away win in ages last weekend. Funnily enough that came immediately after Harry Redknapp had limped away from the club. Amazing isn’t it? How footballers can suddenly win games once they’ve succeeded in getting the manager sacked.

And if Villa go down, who is to blame? The owner, Paul Lambert and the players. And, yes, the fans who thought a top six finish was failure. If they find themselves going to watch their team play in the championship, then they will know what failure both looks and smells like.