Cristiano Ronaldo turned 29 years of age yesterday, February 5th. His present from the footballing authorities was to be banned for three matches.

Even before he was joined by friends and family to celebrate his birthday, It had been an eventful few weeks for the second best player in the world.

A few weeks ago he wept tears when picking up the Ballon d’Or trophy that marked him out as the best footballer of 2013. A deserved honour.

But, within weeks, the less attractive side to his character returned. Sent off for Real Madrid against Athletic Bilbao, he has been handed a three game ban. Two of the games relate to his dissent at being shown a red card for violent conduct. Had he just walked off down the tunnel shaking his head, he would have been banned for one game. But the gestures he made towards the fourth official led to him receiving the more severe punishment.

They may still win the title, of course. But without the skills of Ronaldo they may slip up.

Ronaldo is the most improved player I have seen in the past couple of years.

Not the best player overall. Not for me at least. That honour still belongs to Lionel Messi. But Ronaldo was the best player in the world in 2013 and I have enjoyed watching him play.

The petulant side to Ronaldo that was seen too often when at Manchester United has clearly not gone. He is still capable of throwing his toys out of the pram. Or in the direction of a match official. It is his least appealing characteristic.

And it’s nothing new.

Cristiano Ronaldo was expelled from school aged 14. His crime? Hurling a chair at a teacher.

So, you see, his temper is not as a result of the demands placed on him by the game of football. He had a tough upbringing and shared a bedroom with his brother and two sisters on the Island of Madeira. His mother was a cook and his father, who was to die in 2005 from an alcohol related disease, a gardener.

Ronaldo says that as a child he never received a present for Christmas, or on his birthday, and the first time he flew on a plane was when he boarded the aircraft to sign for Manchester United. His career has never looked back since.

In the last couple of seasons at Real Madrid he has concentrated more on the best side to his game. His pace, power and skills on the ball. He took advice from the greatest player to play for Portugal, the recently departed master, Eusebio.

As Ronaldo matured, Eusebio told him to do “what you do best” and to stop “wasting your energy arguing with referees.”

Ronaldo is the player Sir Alex Ferguson was dismayed to lose. Fergie told him: “I’d rather kill you than sell you.”

But to Real Madrid Ronaldo went and where would that club have been without him these past few years? Initially Ronaldo was his old selfish self and he has taken years to realise a football match is not all about him. He took time to become a team player, but has been a much better performer for so doing.

He was furious with Real Madrid when they sold Mesut Özil to Arsenal. Özil had assisted more goals in Europe than any other player and Ronaldo relished how often the Greman midfielder had created goals for him.

Any striker would miss the influence of Özil and Ronaldo has grown weary of seeing providers and goalscorers leave Real Madrid. Before Özil it was Ruud Van Nistlerooy. In that instance Ronaldo was the creator. He laid on a plate numerous goalscoring opportunities for the Dutchman.

Many thought that working for his fellow countryman Jose Mourinho would benefit Ronaldo. But it didn’t turn out that way. Mourinho put his arm around the young shoulders of Ronaldo often and, at one stage, it looked as though their working relationship was a good one for both men. But it ended badly. The two men did not part company as the best of friends. 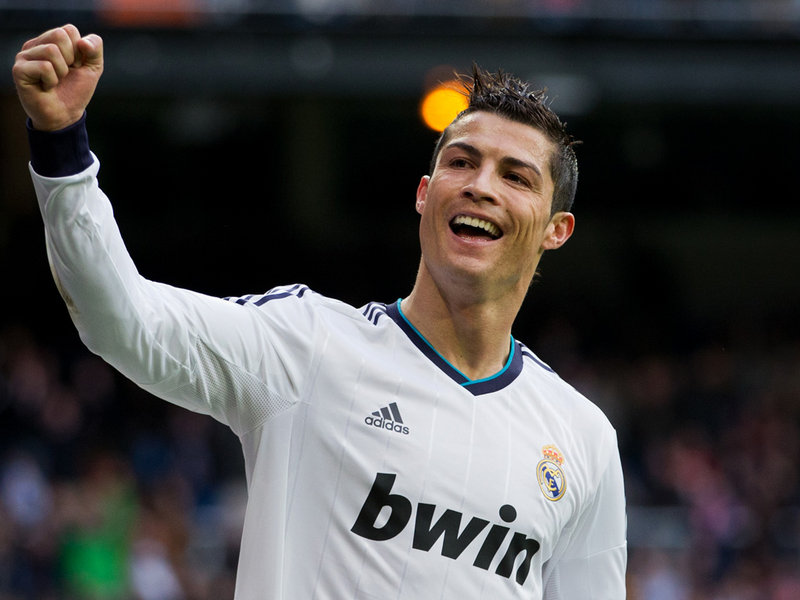 The current manager is Carlo Ancelotti. A good man and another good manager to have the great fortune to work with Ronaldo.

Ancelotti is full of admiration for Ronaldo: “He is the best I’ve seen. Of course I have seen him play many times before coming here, but when you’re up close every day his technical skills are unbelievable.”

One of the oddities with the modern day footballer I will never understand is why so many of them look up at the big screen to admire themselves. Perhaps they have had a shot, or been fouled. The first thing they do, while the game is going on, is to take a look at themselves on the screen in the stadium. Why do players do that?

No player does it more often than Cristiano Ronaldo.

He was once asked why he is on the receiving end of so many jeers from the crowd. He quickly retorted: “Because I’m rich, handsome and a great player.”

He forgot to add the word modest!

Though his personal life has been the subject of some scandal, he clearly does more than his fair share of charity work and his involvement has directly led to at least one child’s life being saved thanks to his heartfelt appeal for a bone marrow donor.

Credit to the man. Not every player goes as far out of their way to help those in need.

And he helped the Portuguese team qualify for the World Cup in Brazil this summer. Let’s be honest, Cristiano Ronaldo single handedly got Portugal to Brazil.

In the space of 38 minutes against Sweden he scored a hat trick that ensured it was he, the man who uses more hair products than I have hair, who would be displaying his sublime skills in Brazil.

It came at the expense of his good friend Zlatan Ibrahimović. Another character who can be brilliant one minute, and bad the next.

Above is the birthday present Zlatan gift wrapped and sent to his friend Cristiano.

Ronaldo tweeted Zlatan to say “I’m sure it would look better on me than you.”

As he enters his 30th year, I feel sure Ronaldo will wear it well.

And, for all his sometimes childish behaviour annoys the hell out of me; we should relish watching a gifted football at the peak of his powers.

Here are some magic moments from 2013