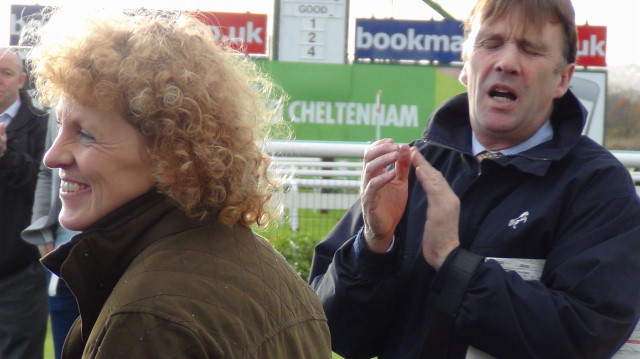 Last November I got to meet one of my favourite trainers, Lucinda Russell. So often overlooked by the media, largely due to her being located so far from the metropolis, Lucinda Russell knows what it feels like to train a winner at the Cheltenham Festival.

Members of VG Tips won on her Brindisi Breeze at odds of 12/1 in 2012. I cheered that horse home so loudly you could have heard my cries up in Scotland.

Russell has had to deal with terrible trauma since. In totally unrelated incidents both Brindisi Breeze and the jockey that day, Campbell Gillies, died in tragic accidents far from a racecourse.

She took the loss of Gillies hard, but it is testament to how much she is respected that some of the most promising jockeys want to ride for her.

She told The Scotsman newspaper: “I have to say that at first I didn’t really appreciate how important Cheltenham was when I started training, but I absolutely do so now. It doesn’t take you long once you start training to learn how important it is and, with Musselburgh putting on its trials and Kelso having some big money races in the run-up to the Festival, Cheltenham is much more visible in Northern racing than it was before. I am very proud of the fact that we are the last Scottish stable to win at Cheltenham.

“We have Brindisi Breeze’s half sister, Lady Maggie, who will be running in a bumper (National Hunt flat) race soon. No doubt, like Brindisi, she will improve with racing, and she probably won’t be flashy first time out.

“We are really lucky that the standard of our horses is going up and it is good that we are competing at this level – it is well worth the journey south.”

So which horses will make the trip to Cheltenham, and in which races will she run them?

Russell says: “Green Flag has done nothing wrong and it is a big toss-up whether we run him in the RSA chase or stick to the handicap chase on Tuesday. I don’t think he has been very harshly handicapped on the runs he has had so far, and he could be on a good mark, so that’s why I am tending towards Tuesday’s three-mile handicap.

“Tap Night he was a really good novice for us but he kind of fell to bits when he started jumping fences,” said Russell. “It’s taken a bit of time to get his confidence again and he’s had to step up a gear in handicap company, but I thought his last run at Cheltenham was good and, if he can hold it all together, he has a good each-way chance.

“Lie Forritt was third in the big hurdle at Haydock, and that was probably a really decent quality race, and we had to run him too soon after that race to make sure that he qualified for the Pertemps,” added Russell. “He has had a nice break, and is possibly off a good mark, though he is a couple of years older than when he raced off a mark of 150. If the ground is on the easier side, he could be a good each-way chance at a big price.

“He’s had four real runs over fences, as last time he slipped up on the bend at Wetherby so that doesn’t really count. He’s done everything well for us but he’s still a little bit naive and this will be his biggest test to date.”

I hope Lucinda Russell has a Cheltenham festival that is memorable for all the right reasons. At a time when too many trainers couldn’t smile if you paid them so to do; Lucinda is a hard working, caring and meticulous trainer who realises that the sport should also be fun.

I often people watch at racecourses. I study the demeanour of trainers. And a smile always comes to my face when I so often see Lucinda Russell interacting with spectators and punters.

And, as she does so, she flashes that winning smile.