Barcelona – I think it’s all over

It was just before Christmas, 2003. It was the wettest I have ever been at a football match.

When it rains in Spain it does so in spectacular fashion. Areas of Malaga province flooded that night.

And, in La Rosaleda Stadium, the floodgates opened. Barcelona were well and truly stuffed 5-1 by Malaga.

I doubt anyone watching this game would have predicted that Barcelona would soon become a force in European football for a decade to come.

But they did. The Barcelona of Pep Guardiola played the best club football I have seen.

They played the game as I have always believed it should be played. With pace and via perfect passing.

The culmination came, for me at least, seven years after that humiliation at Malaga.

It was the 5-0 demolition of Real Madrid in November of 2010. I watched it in a bar full of Madrid fans. I applauded. They sat open mouthed.

Barça played exquisite football that night. Some of the best I have ever witnessed. If you missed that game, watch and enjoy in full and, with English commentary, here

La Liga titles and Champions League honours followed. The world drooled at the genius of Lionel Messi, Andrés Iniesta and – my favourite player in the world of recent years – the incomparable midfielder, Xavier Hernández.

Or, as is the way with great players, one word will do. Xavi.

Carlos Puyol held the back line together, even when his hair was going in a different direction. I do like a man who stays loyal to his hairdo, regardless of the march of time.

Among Barça fans there was always the underlying feeling that the defence was the weak spot. But it didn’t matter. To be a threat the opposition must first have the ball. And, no matter how much they chased, they couldn’t get hold of it.

I can’t remember how many months ago it was I stated here and on Twitter that the best days were over. That some clubs had sussed how to play Barcelona (I sussed how before they did!).

I alleged that the pace had gone from the side and that they would soon be winning nothing. They would once again be taking a back seat behind Real Madrid. That post and tweet may even have been over a year ago.

The abuse I received from fellow Barça fans knew no bounds. There was the usual underlying racism I have come to expect in Spain.

What would an Englishman know football? When did England last win a World Cup? But there was a level of blind arrogance that led the abusers to deny anything was wrong, or would be wrong. Ever!

I thought the writing was on the wall when Pep Guardiola announced he was leaving. Pep has his critics (none more vicious or funny than former Barcelona striker Zlatan Ibrahimovic). But to my mind if he was going he was doing so because he knew he had achieved all he could with that fabulous team. And that, just maybe, they had peaked as a dominating force in football.

Pep left for Germany with the promise of a bottomless pit of money to spend. That’s if he felt the need. After all, Bayern Munich were already a very good side.

The best managers know when it is time for them to leave the stage. Alex Ferguson did. Pep Guardiola did.

Leave the fans with only good memories of you. Do not risk your reputation by hanging around to build a new side. It’s not that easy.

Fast forward to 2014 and, in the space of a few days, Barcelona got knocked out of the Champions League, lost a La Liga match to my former local team Granada, and then lost the Copa del Rey final to Real Madrid. The last defeat alone would not have been a great concern.

But it came soon after Barcelona’s fortuitous 4-3 league victory against Real Madrid. A thrilling game to watch but one Madrid threw away and which Barça were lucky to win.

I for one was not surprised at the developments of the last week. It had been coming. Nor do I expect Barça to win La Liga. The title will go to Atletico or Real Madrid. More likely the latter (currently Real Madrid are best price 7/5 to win La Liga).

Not that I was alone in forecasting that the end was nigh for this Barcelona team.

Sid Lowe, author of the excellent book ‘Fear and Loathing in La Liga’ also saw this chain of events coming.

He says: “There has been a massive backlash from the fans. All season Barcelona have been two or three bad results away from a crisis. There has been a real doubt about the manager, Gerardo ‘Tata’ Martini.

“At an institutional level they’ve got an enormous amount wrong. You’ve had the problems surrounding the Neymar transfer, the resignation of the President, the fact they have now had this FIFA ban; there have been colossal problems at institutional level and to some extent it was the team that was sustaining the institution. Now the results are deserting them, that’s completely falling apart.

“Barcelona are a team doing what they’ve always done but doing it much, much slower.

“There isn’t the speed of the circulation of the ball that used to be there.”

Sid Lowe continues: “In particular you can look at the role Xavi (above) has played this year and how often he’s had to be rested. I think he may well be the most important player in Spanish football history but, sad though it is to say, I think he is coming to the end. In the last seven summers he’s only had one summer off. That’s really taken its toll on Xavi.

“I actually think that Lionel Messi is perhaps to some extent a victim of International football as well, but for completely the opposite reason. There is a very, very strong suspicion in Barcelona that Messi is trying to protect and reserve himself for the World Cup. I think that right now that is his priority.”

For those of us who have been around a while, we’ve lived through Real Madrid dominance. I have witnessed first hand the all conquering Barcelona of recent years.

There will be some people reading this who were not born when Liverpool were invincible. Others who have never stared at a League table that didn’t include Manchester United in the top two. Both clubs will be back among the honours one day.

In the 70’s, 80’s and 90’s the Spanish national team were often fancied to win World Cups or European Championships. Time after time they failed.

Since 2005 I have lived in a Spain that can now boast about European Championship and World Cup final victories.

In my early days here such triumph seemed light years away and you would have been laughed at had you suggested that Spain would reign supreme in European and World football.

Between 2005-07 my requests to watch a friendly or International game involving Spain were mocked by everyone in the bar. Each time I asked, I was outvoted by those who found a Steven Segal movie more entertaining.

Then came the Fernando Torres winner against Germany in the 2008 Euros final. And, suddenly, every Spaniard supported their national team!
But the same happened when I was a schoolboy and England won the World Cup in 1966.

FC Barcelona must now pay the price for some dodgy dealings in the corridors of power. As a fan I am sorry they stopped so low. A two year transfer ban has been imposed. They cannot sell and, crucially, they cannot buy.

If the club doesn’t manage to get that ban overturned (money changing hands should do it!) then it is quite possible Barcelona will win nothing of note for 3-5 years to come. By which time the joy of watching Xavi, Iniesta and Messi in their pomp will be but a distant memory.

Yes, the club needs to change its manager. And it will. But that is only half the problem facing what is més que un club (more than a club).

In a country that would be a third world one were it not for the black market, dodgy dealings and under the counter payments; FC Barcelona can no longer claim to hold the moral high ground.

They were found out over the transfer dealings that saw Neymar come to the Camp Nou. The club rested on its laurels post Pep. They allowed a South American manager to change the very pattern of play that had proved so successful.

But it’s about more than that. On the pitch they have lost Puyol to age and injury. Xavi will soon follow. Cesc Fabregas was never going to be a like-for-like replacement. There is no commanding centre half to play alongside Pique. They need a new goalkeeper. They need to re-energise Lionel Messi and they can best do that by signing someone up front who will score plenty of goals. 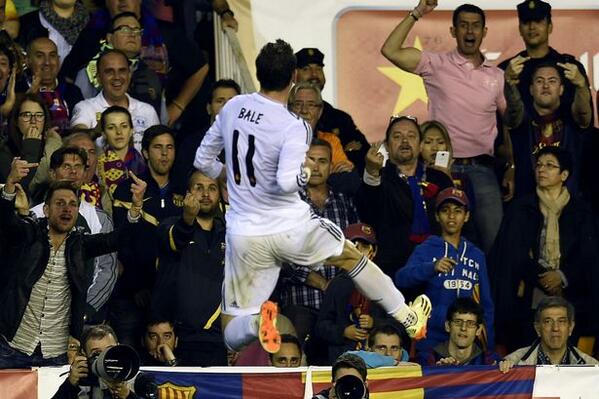 The goal Gareth Bale scored yesterday was a gem. Had that been scored by Messi, supporters of Barcelona would have been wetting themselves.

But look at the faces of the Barça fans giving Bale abuse. The football purist in them wants to applaud. But, of course, they cannot. This is the lifelong enemy, Real Madrid, scoring a classic goal in another El Clasico bout.

Barça fans know a great goal when they see one. After all, in recent years, they’ve seen plenty.

They are the faces of fans who think it’s all over. The dominance of Barcelona that is.