So often these days the best racing is reserved for a Saturday. That makes it all the more desirable to make as much profit from selections made on that day.

On Saturday January 27th, I offered members of VG Tips selections in seven races. It was what I call a percentage call, each way play day. My sort of betting day.

Yes, there were odds on winners to be had for those who don’t mind betting in that fashion. That’s not me, but I respect the fact punters have different tastes when it comes to betting and my selection service tries to cater for all tastes.

In 7 races selected last Saturday, there were profitable punts in all 7.

Wakanda (photographed above) was tipped by me at odds of 9/1 the night before racing. In one of the many thrilling finishes on the day, Wakanda squeezed through the middle of other horses late on in the race to win, and ensure the well backed on the day favourite, L’Ami Serge, was prevented from finishing better than third. It was a strange, patient ride by Davy Russell on the quirky, not always reliable L’Ami Serge. Unquestionably the best horse in the race on paper, different tactics were applied for L’Ami Serge, but they backfired. Russell left it too late and he could not force his way past Wakanda.

Colin’s Sister, a 12/1 each way tip, returned further profit for members when finishing a gutsy and staying on third in the ultra competitive Grade 2 Cleeve Hurdle.

Black Op was a very pleasing second in the Grade 2 hurdle at Cheltenham that was won by the much talked about Nicky Henderson trained Santini. Black Op raced really well and was only worn down late on and beaten by three quarters of a length. But, take note, the Tom George trained gelding finished 29 lengths in front of the third horse. Black Op has been in my notebook for some time. He very much remains there. I shall be looking out for his next race. Black Op was an 8/1 each way tip to members. More profit and your stake safely returned to you. That’s sensible betting. That’s profitable punting.

Odds on backers won via Sceau Royal and Apple’s Shakira – both of which now go forward to stiffer challenges at the Cheltenham Festival.

But, personally speaking, the win only bet that attracted me last Friday night was the Willie Mullins trained, Laurina.

This was my one selection for members at Fairyhouse on Saturday. The 5 year old filly was racing in the Grade 3 Mares Novice Hurdle.

In my e-mail and website post to members only, here is what I told my monthly and annual followers:- “A 15 length winner of a 14 runner maiden on heavy ground last December, Laurina is a 5 year old daughter of Spanish Moon. You would have had to have been a follower of me and my tips since 2008 for you to have won backing Spanish Moon more than once on the flat when ridden by a jockey that seemingly could not lose for us back in those days, Ryan Moore. Spanish Moon and Ryan Moore went on to win a Group 1 race for us in France at odds of 8/1. Happy days. If his daughter has inherited some of that talent, we could now be watching the early career of a future Grade 1 winner over hurdles.” 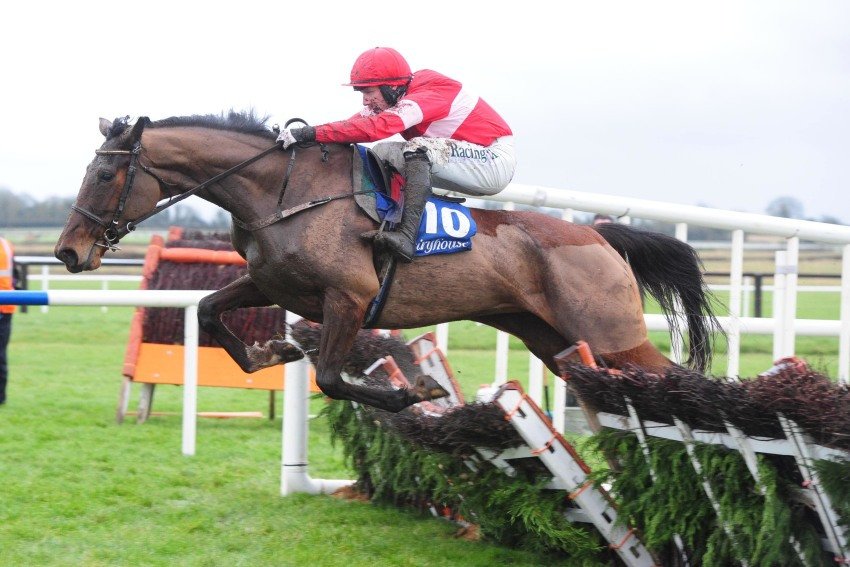 I wish I had placed an ante-post bet on Laurina (pictured above) for the Mares’ Novices’ Hurdle at Cheltenham on March 15th.

I was so busy serving my lovely and loyal subscribers that I forgot to check out the ante-post price for her before the race at Fairyhouse last Saturday. The ease of that victory has led bookies to make her the 3/1 favourite to win that race. She’ll have to fight off the likes of Maria’s Benefit and Apple’s Shakira to win that race at the festival, but the smile on the face of the man likely to ride her that day, Ruby Walsh, told me the Mullins team really fancy the filly to do precisely that. I’ve missed any each way price for her at Cheltenham and I will now wait to see how the betting market for that race progresses. There’s a chance the odds about Laurina will improve a little between now and then.

The one that got away for me on the day – but which some members backed anyway because of the praise I heaped on him in my write up – was Definitly Red, which came out on top in the Grade 2 Cotswold Chase at Cheltenham and will return there for the Gold Cup on the final day of the festival on March 16th. On Saturday I opted to be on American each way at 11/2 and I was pleased to see that one finish second, beaten only by the more experienced Definitly Red. But I also had my eyes peeled for the little beauty, The Last Samuri.

I’d had a second each way bet on the Kim Bailey trained The Last Samuri, which finished a fast finishing fourth, just squeezed out of the each way places. But that didn’t matter. Members of VG Tips who were with me in April of 2016 will recall that I offered them two double figure odds each way tips for the Grand National at Aintree. One was our 50/1 winner, Rule the World. The other was the runner up, The Last Samuri.

Kim Bailey was pleased that The Last Samuri (pictured above) was doing his best work at the finish of his first race at Cheltenham. Bailey said of the horse: “He’s a good ground horse and it would have suited him to have had faster ground today, it was proper soft. He’s tried his heart out. He’s run a proper race, a proper Grand National trial. All he was doing was staying at the end. I think what we’ve seen today is that he goes straight from here to the National at Aintree and, fingers crossed, have a great chance.”

I shall be looking out for the handicap mark for The Last Samuri come April. I think he will face some stiff opposition this year and I already have my eyes on one or two others in the race as well. But members of VG Tips will get my ante-post Grand National fancies nearer the time. Can I pick the winner for the third successive year? Time will tell.

First we have the Cheltenham Festival between March 13 and 17th. Click here to join VG Tips before then.

In the meantime, I hope that existing members have banked their returns from 4 winners and 3 each way placed tips from last Saturday. This is the time of year when punters should be saving profit for bets at the best race meeting anywhere in the world.